By Unknown - July 20, 2017
Pour les amis francophones ce billet sera encore en anglais. On prévoit de les faire moitié-moitié VF-VO à terme.
It's hard letting go of control, but it's the end game of parenting. Today Samuel & Nathanael discovered Grandma's crystalware, which was just too tempting to ignore. My gut instinct would have been to say no due to the risk of broken glass, but Grandma said yes, and said she didn't mind broken glass - it was bleeding children who've cut themselves on glass that was unacceptable to her.
So with the firm instruction not to touch any broken glass, the crystal treasure banquet could begin. And of course they didn't break anything.
We went into town on the bus to join the public library. Although I've learned to let go of control in many situations, crossing the road with the kids puts me in max-stress hyper-control 'WILL YOU JUST PAY ATTENTION TO THE CARS' mode. I blame it on statistics of road deaths but to be honest the statistics in question are entirely fabricated in my head. Still, crossing the road has potential consequences beyond bleeding fingers so I will stick with max-control scream-at-them-if-necessary parenting approach until either I come up with a viable alternative or they leave home.
Another day in the self-awareness and emotional growth programme they call parenting. 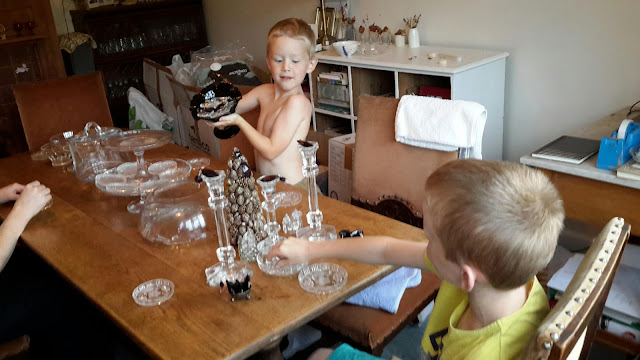