By Unknown - August 17, 2017
Our last week has been spent in a beautiful house generously offered to us, including a long weekend with my sister Catherine and her family. We've not been updating the blog mainly because we were out doing things, and in the evening we were either busy relaxing or busy working.

For example, this last week we have fine-tuned our budget for the year to come and updated our budget tracking tool with expenses so far. Our budget tool is a critical piece of our family infrastructure and every penny spent is recorded. It's one of those paradoxical things but it turns out if you think about money, you end up not having to think about money. Where as if you don't think about money, it becomes something you can't avoid thinking about.

I've also been doing some work in the evenings for the Banque de France. I haven't quite finished my current job there and am attending a work meeting in Copenhagen end of August before heading to Paris 4th-8th September for my final week before my sabbatical. Although I love the work I've been doing for the past 2 years and I look forward to talking about it to 28 other central banks in Denmark, I'll be glad to disconnect entirely on the 8th September. It's been one of those projects where I couldn't avoid thinking about it when out of the office, because if the truth be told I didn't really want to. I was having too much fun. 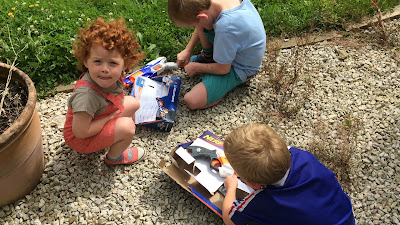 On the activity side we had a day at the beach including a swim for the bravest, we had a day out on a sailing boat about which you will no doubt hear more, we went up the Tamar valley railway and walked back to the pretty town of Calstock. In other news we let our children buy Nerf guns, and on Sunday we joined with the Plymouth Vineyard church for their family worship.


We've set off again in Lucia, the van, and we're now near Lostwithiel, and tomorrow it's the Eden Project! Big excitement for the world's biggest greenhouse... 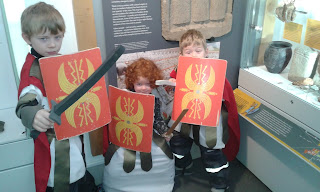 we went to housesteads  roman fort and we walked on hadrian's wall.     we loved dresing up as romans and britons   As you can see, we had great weather for our visit! We were the first visitors to arrive - we were lucky to be following a car with nice fat snow tyres which meant we actually got up the hill. We discovered where the Roman soldiers lived, built snow soldiers and made snow angels,  and admired the Roman toilets. We were very hungry at the end, and Nathanael's jumper had ice growing out of it (he'd been enjoying some sledging on his bottom!!).
Read more 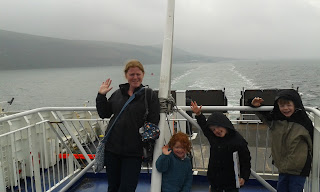 It is with mixed feelings that we waved goodbye to Scotland this morning as our ferry pulled out of Loch Ryan into the Irish sea. We've spent the last 9 weeks exploring what the country has to offer, and have enjoyed where possible simply living in the different places we have visited. The geographical extremes of Scotland are well illustrated by the place we left from - Stranraer. It is a hundred mile drive from the English border and yet it is further south than Newcastle-upon-Tyne. This is a country that has 6200 miles of coastline on the mainland alone, and yet is only 25 miles wide in the middle. That's not normal, but it makes for a lot of cool bridges. Each place we have visited has been special in a different way for us. Edinburgh was a time spent with friends, where the warm welcome was more than enough to compensate for the freezing weather and heavy snow. We then left the snow and ice behind by counter-intuitively heading north-west, first stopping at Loch Nes
Read more