By Unknown - August 23, 2017
We've spent the last 5 nights at a little campsite on the Lizard peninsula, the most southerly part of England, and therefore also the UK. If we were searching for sunshine then it only worked a bit as the mizzle (Cornish mistly drizzle) and rain were never far away over the weekend. As the weather cleared on Monday we decided to head to Land's End one of the sites on our Atackopoly tour of the UK game-board. If you haven't yet been introduced to that then you'll have to remain in suspense for a bit longer.

While preparing our drive out in the van to Land's End I was disappointed to realise that it's not even the most westerly point on the British mainland, an honour which belongs to Ardnamurchan Point in Scotland. Land's End is now a kind of "come spend your money here" theme park with attractions, food, drink, more food, more drink, and you can even pay to visit a farm! (after driving through 200 miles of countryside). We ignored all the Attractions and instead enjoyed they original attraction, which is the fabulous scenery and dramatic cliffs. And yes, the kids just wanted to go and do Arthur's Quest and the other expensive stuff but they were satisfied with the above-average play area instead.

Thankfully we made our day out more interesting with a vist to St. Michael's Mount in the morning. We had lunch at a pub in the town opposite and generally found ways to avoid the crowds. Although totally packed with tourists it was still a nice place to hang out. 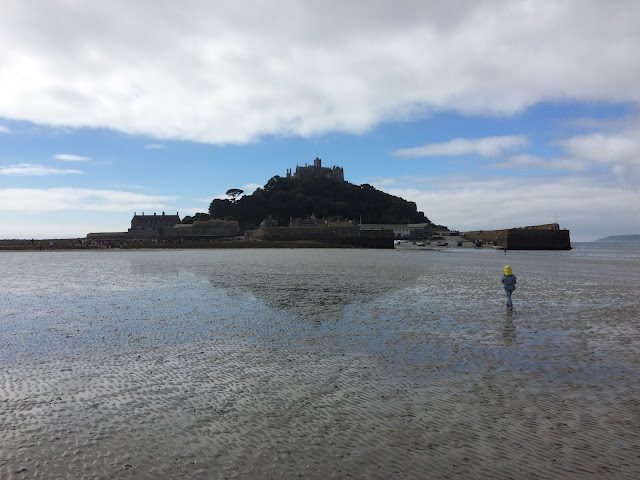 The last two days have been altogether more enjoyable and interesting. It struck me that us having good days could be strongly correlated with having good weather, and that's something we're going to have to change in the months to come. 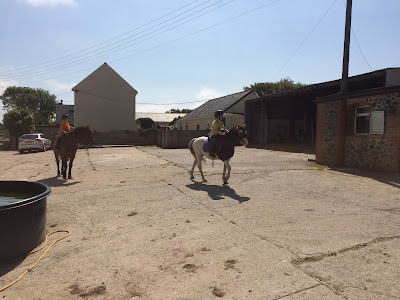 Yesterday we had booked Samuel & Nathanael a horse ride out in the countryside around Mullion, and then we cycled down to the beach at Polurrian Cove. In total we cycled 10 miles on Tuesday which was a massive effort for Nathanael but he did really well. In general the traffic on the A3083 is considerate and careful, and we take all the precautions we can to make sure we're visible and safe. As Laura blogged in French, the only accident we've had on the bikes was when we took a footpath while trying to avoid the main road. 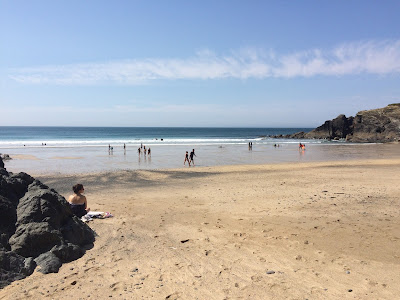 Although the beach a Polurrian was lovely and not too busy and we had great time jumping over the impressive waves, we've had our best day of the week today at very different kind of beach. This morning we all just chilled out at the van (some of us watching a new Pokemon DVD) and then this afternoon we cycled 1 mile down to Cadgwith where there is a tiny fishing port which encapsulates all there is to love about this part of the world. At the little beach, called Little Beach, there's no sand, there are no waves, and yet everyone was totally happy and more relaxed than at any time in the trip so far. We even managed a photo of all of us...


To finish I'll just add that we are now trying a new approach for bed times. We were all getting miserable with fixed bed times for children with different needs and rhythms, and all sleeping in the same bed. Myriam especially was finding it difficult to settle, and would often go to bed first but be last to sleep. So for the last two nights sleep time has been decided by the kids themselves. They have fixed times for getting in pyjamas, and for story time, and there is no noise or talking after 8.30pm, but they can sit quietly and read until they are sleepy. Myriam just plays on our bed and then at some point keels over and falls asleep. Samuel took himself off to sleep at about 9pm tonight. It's only been two nights so far but the early results are promising.