By Unknown - September 15, 2017
This blog post has been marinading slowly inside me since we set off 6 weeks ago. I am informed, reliably or not, that blog consumers aren't really interested in where we've been or what I cooked the family for dinner. What really gets the hit counter spinning and the Google Ad-words revenue rolling in (just kidding, we haven't turned it on yet) is drama, difficulty, pain, and generalling stuff going wrong. Well if that's true then on the surface you're all going to be disappointed; the van is in one piece, we are enjoying a week's stay near Canterbury, the sun is shining - it's all going well. But this blog post is not going to stay on the surface. We're going to explore the dark underbelly of our daily experience, and I'm not talking about emptying the chemical toilet.

As any family with young children will tell you, bedtime can be difficult. My network and friends tell me that bedtime is difficult most of the time for most families. Well then it won't come as a shock to know that getting the kids to sleep is a daily challenge for us, and the context of doing it in a campervan simply adds intensity. By 7:30pm Myriam is starting to lose control of her body and emotions, and really just needs to go to sleep.
So it's at this point that she will methodically move from family member to family member and do the thing that annoys that person the most. She will then smile sweetly, apologise, and move on to the next victim. My personal sensitive point is causing damage to the van, as we are in fact intending to sell this vehicle if there is anything left of it after 12 months with us. When Myriam wants to get to me she will literally bite chunks out of the foam headrests  - but be rest assured she's very "sowwy". This evening she pressed Laura's button by playing the clown and putting freshly washed-up wine glasses over her ears and doing an alien impression. "Sowwy mummy".
Sometimes we can get her to just play or read quietly until she falls asleep, but the van just isn't dark enough or quiet enough for her to fall asleep the normal way - you know, lying in bed and closing her eyes. Twice this week she has fallen asleep while strapped into her car seat in the front of the van, listening to Twinkle Twinkle Little Star on repeat on youtube for an hour. If that doesn't sound like gentle parenting, you're probably right, but when there is nowhere else to go and no doors to close, strapping her into a seat is the only way we can get her brothers to bed without totally losing the plot.

Talking about brothers, you could reasonably hope that a 9 year old and a 7 year old (well they will be that old within a month) could get themselves off to bed quietly without any fuss. What I have discovered over the last few years is that if you leave tired 9 and 7 year old brothers to themselves to do anything at all, then the outcome is almost always a fight. 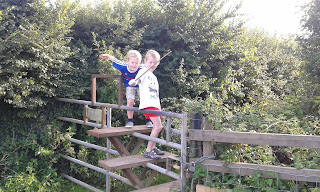 This could be just low level skirmishing, or it could be full-on neck-hold while punching, but the result is always the same - a 120dB siren of a wail which the younger child lets out in order to inform parents and regional authorities that elder brother is hurting him. This sonic weapon is deployed at every opportunity, and at bed time the elder brother brushing against him while making his way to the bathroom is sufficient to trigger it off. To be fair, the elder brother, frequently fustrated by younger brother's skillful manipulation of parents just resorts to a good old punch to solve most of his issues. There is no beginning and no end to this conflict. It started the day Nathanael could crawl and will go on until they either seriously injure each other or until they realise that violence doesn't solve anything.
This daily conflict in my face makes me miserable. I have spent my life trying to avoid conflict and I have no experience or tools for dealing with brotherly violence. We do now have a penalty system in place which has been agreed with them and the fines are 10p for starting a fight, 10p for continuing a fight. Here's hoping that the love of money will save me from their brawling. In the mean time I have recently added headphones and a bottle of whisky to the van inventory to help with moral.

Don't get me wrong with this post - in no way are things all bad. What things are, is more intense. The good moments are better, and the bad moments are harder. Now, let's hope that the ad-revenue from this will pay for my single-malt supply....
Still hoping to find out something about Kent?
Good things :
- Canterbury city has impressed us with it's city walls, Roman burial mounds, imaginitive play areas, river punting, Cathedral gateway and bus services. 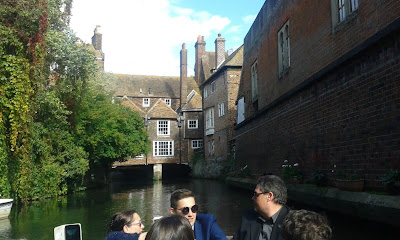 - Richborough Roman fort ruins, the gateway to Britain before Eurostar 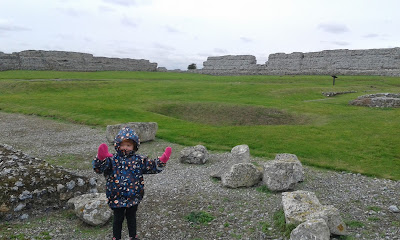 - Thanet used to be an island - who knew?