By Unknown - October 16, 2017
At this point, in order to understand our choice of destinations it might be useful to introduce you to Atack-opoly 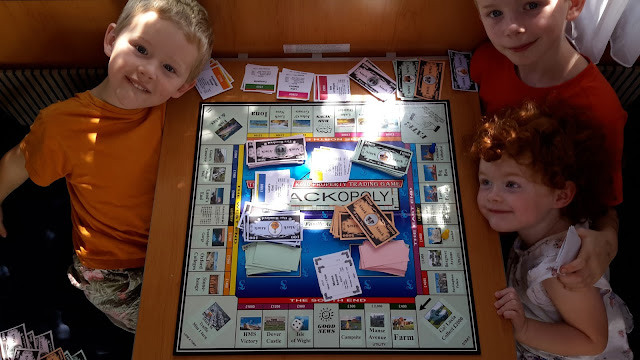 A gift that sat unopened on a shelf for many years has become our overall plan for this trip. It's a make-your-own monopoly type game which we customised with a photos of all the places we want to visit, as voted for by each member of the family. Myriam said she wanted to go fish (sic) and so Fish & Relax is the 'Free Parking' square. If you zoom in a bit you'll see that Snowdonia National Park is on the left hand side and so that's where we went. (We're not doing the spaces in the order they are on the board, nor should you pay too much attention to the East/North/South/West thing.)

We stayed at the southern foot of Snowdon in a lovely campsite which is currently fighting for survival. Beddgelert the nearest village kept us supplied with cakes and coffee and the other things you need when you go out for a cycle in the pouring rain. Once again somehow we managed to be camped yards away from the West Highland railway taking steam trains from Caernarfon to Portmadog and the campsite had it's own station. We had some great interactions with other people at the campsite, and especially the couple who have been managing the site during it's last few weeks of existence. Both the railway and the townsfolk of Beddgelert have opposed the planning application to turn it into a more up-market resort with luxury log cabins.

After a couple of days enjoying the campsite and the forest we took a day-trip out to the Llecwedd slate mine at Blaenau Festiniog. 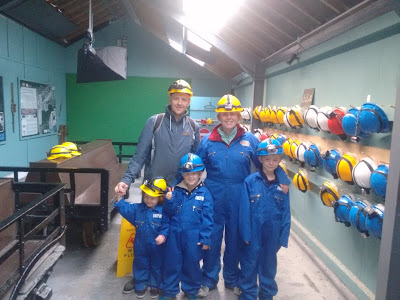 Given that the industrial heritage of the whole area is mining it was a good way for us to understand the culture of the area and to experience what it is like to work 200m underground. Laura's great-grandfather was a coal-miner in south-Wales so there was also a family story about welsh-mining which helped the children link that place to their own history. The vast slate caverns are actually very beautiful and peaceful in a strange way, at least until the tour gave us all a chance to have a go at drilling into slate with an iron hand-drill. The children were delighted to receive a hand-cut slate roof tile from our tour-guide Phil at the end, and Myriam was so happy to be out of the mine she invited him to join us in our campervan for a day or two. Fortunately for Phil he was a bit too busy to accept.

We originally intended to climb Snowdon with the help of the mountain railway, but upon investigation we worked out it was going to cost us close to £120 to get the whole family a return ticket for the 4.7 mile journey to the summit. That makes the Heathrow Express look like good value. 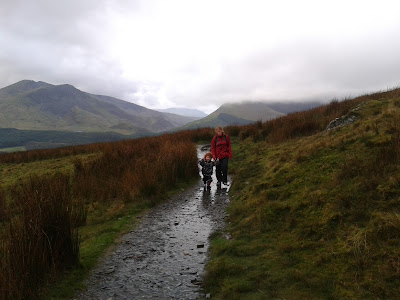 In the end we decided that we would regret not having hiked up the mountain and so our last full day was to be an ascent of the second-highest peak in the UK. Armed with snacks with enough calories to feed a welsh rugby team and waterproofs for every nook and cranny we set off at 9:40 in the morning up the Snowdon Ranger path a few miles up the road from our campsite. We didn't really expect to all make it to the summit but we didn't want to rule it out and so we set off for the 4 mile walk and 960m climb at Myriam's pace. 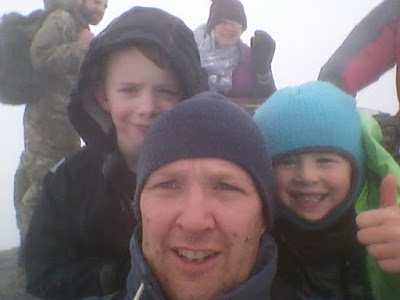 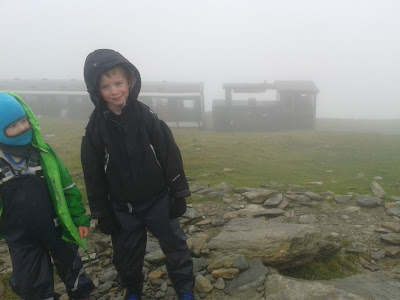 The low-cloud hanging over the mountain top wasn't very inviting and so when the path started to steepen and the wind strengthened Laura and Myriam decided to head back down while the boys party continued on. We came close to giving up a couple of times as our legs got weary but with a big effort we finally made it to the summit at 13:45. It felt great to stand in cloud with zero-visibility surrounded by people who had paid £25 each for the privilege of being blown off their feet while we had got the same experience for free. On the way back down the boys were exuberant and grateful for being partly dragged to the top. As we descended out of the cloud and the sun broke through and lit up the various lakes in the valley below, they were literally bouncing on and sliding down the slate boulders which constitute the path at that point, with no hint that they were 5 hours in to an 8-mile hike. We ran the last 500 metres in order to catch the bus back to the campsite and so managed the whole hike in 6 hours and 10 minutes, including a picnic. 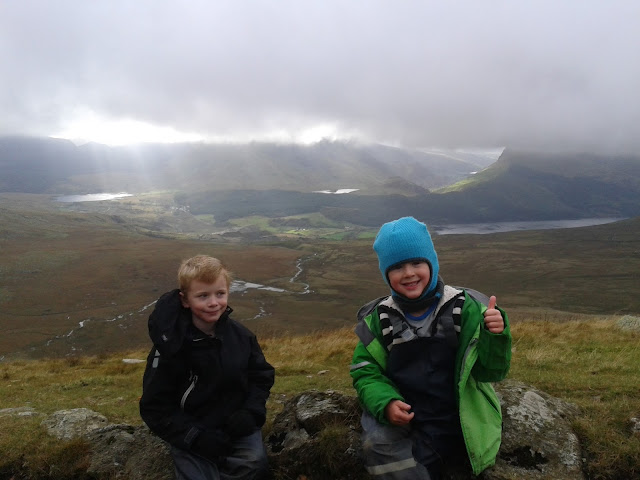 Laura and Myriam were able to catch a steam train back to the campsite - which cost about a fiver. 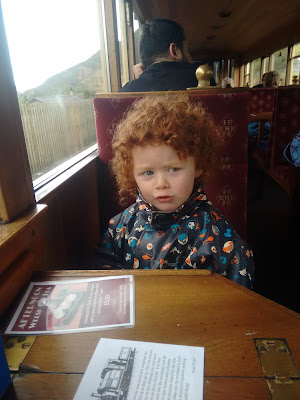 With another space on the Atack-opoly board crossed out we're now back in Wrightington for a few days. Stay tuned for our next adventure...