Day 1 : Nature on your doorstep

Traveling light is our aim but it's relative when there are 5 of you and you're leaving for a year and especially when Dad insists on taking his guitar. Everyone helped carry the luggage through the Gare du Nord and across London from St. Pancras to Waterloo. Going beyond the fact that we actually needed their help, we gave all the children some luggage to carry and be responsible for, to include them in the challenges of negotiating steps and escalators, and so that they felt included in our family adventure from day 1. 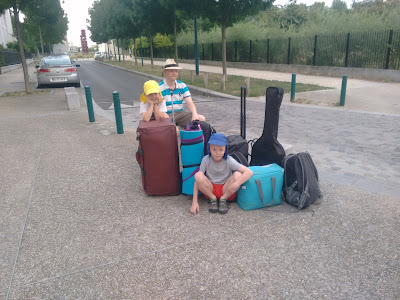 The 21st century world allowed us to speed through the French and English countryside at 300 Km/h (225 mph) this morning, with the fields going past so fast it really wasn't possible for a child to identify animals in the nearby fields before they were instantly out of sight. Fortunately we were able to resort to Lego animations on the tablet to keep the children occupied instead. In 6 hours we were whisked by taxi, train and underground, from our home in Gennevilliers to our Eco-family Explorers base camp in Guildford, Surrey. 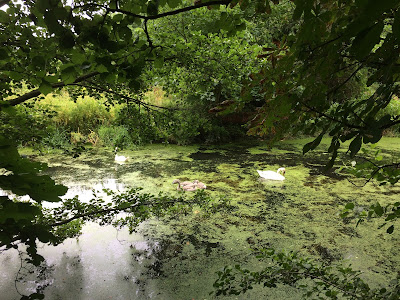 Another characteristic of the 21st century world is that peaceful nature and noisy people live side-by-side in total ignorance of each other. We went out for a walk this afternoon to rediscover the area and to tire out the kids before dinner, and we were both delighted and surprised by the Riverside Nature Reserve a few minutes walk from the Guildford Spectrum leisure centre and bordered by the busy A3 motorway.
We first encountered this family of swans with their (count them - maths lessons for 3 year olds) three cygnets (ed. spelling lessons for 42 year olds) feeding amongst the algae.

Our first day was made extra special by us stumbling across a pair of young deer on the opposite river bank. They ran away but we grabbed this photo as they disappeared out of sight. We only wandered a few hundred metres into the reserve so the only humans we encountered were a couple of mountain bikers, but we found it amazing that such an interesting place exists under the shadow and the noise of the A3. We'll definitely be back to explore further as it's just on our new doorstep. 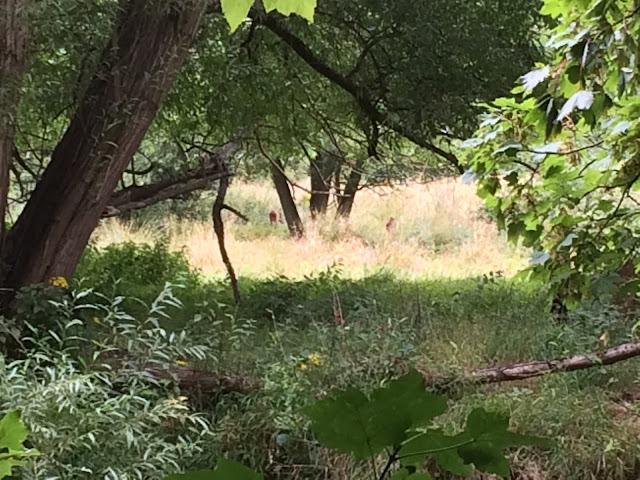