By Unknown - August 08, 2017
Setting off clean and rested from our pit-stop, we were looking forwarded to exploring Devon for a few days. We did get to Devon in the end but day 18 was our most eventful so far. We asked Samuel to blog on day 18 and he wrote this...

Anyone in north-west Europe right now won't need telling that it's been raining, and at our pit-stop site near Charmouth in Dorset Lucia the motorhome sank a couple of centimetres into the saturated-clay bog on which we were paying to park. The inevitble result of trying to drive 3 tons of light-goods-vehicle out of a self-inflicted hole on wet grass on a sloped field was mud - lots of it. After we had dug-out a new flower-bed for the campsite with the front tyres we went and asked them for help and to the excitement of everyone with XY chromosones within a 100 yard radius and Myriam, the manager came with a light tractor to pull us out of the new valley we had created.
All that excitement caused us to take our eye off the safety checklist we have drawn up before setting off. Without a doubt a motorhome is easier than a caravan for moving from place to place, but there is still a long list of things to check, close, store, turn off and empty before hitting the road. To cut to the action scene, shortly after setting off one of our small alcove windows above the cab which hadn't been closed flapped open and hit a low hanging tree branch at the side of the road. The window was ripped clean off although we only figured that out with hindsight and so we continued merrily on our way to collect fossils in Charmouth just assuming that the overhanging vegitation had caused the slightly-louder-than-normal bang we heard.

We only figured out what had happened when we went on a faster road much later in the day and could hear the wind buffeting the open window and realised there was a problem. By then we were an hour's drive away and unable to face a 2-hour return trip to search for a probably broken window we made emergency repairs with thick bin bags and gaffer-tape. First rule of taking any machine anywhere - always have gaffer tape on you. 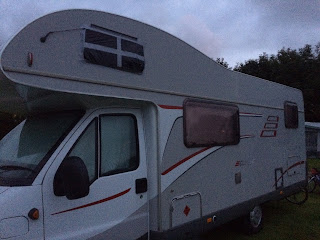 With our wounded van and our wounded pride we continued on to Bay View Farm campsite north of Barnstable, only to realise upon arriving that we actually wanted Bay View Farmers campsite, another 8 miles north on a road unsuitable for wide vehicules. Where there's a will there's a way, and so with our emotions and the emotions of several other drivers worse for wear we finally rolled into our home for 3 days.
The photo captures the gloom pretty well.

The temporary weather proofing has held-up very well and I've insulated the inside with an uninflated camping-mattress and yet more gaffer tape. A new window is in the process of being ordered and the nice man reassured me that the window we lost is pretty much industry-standard, there being only two manufacturers of caravan and motorhome windows for the whole of Europe and motorhome alcove windows being more or less all the same size - bet you're glad you now know that! 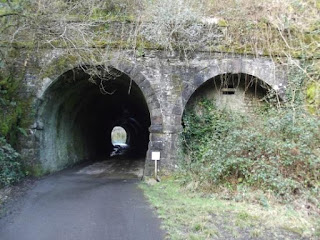 The three days since have been packed full of family adventures but of the positive kind. We cycled on the Tarka trail down into Ilfracombe on Sunday morning to find a lovely church (http://pipandjimschurch.org/) who welcomed us, gave us coffee and looked at us a bit strange when we said we were doing this for a year. After exploring Ilfracombe harbour and going full tourist on the bouncy-castles we cycled back up the old railway line from Ilfracombe to the campsite, more than 3 miles of uphill pedalling which everyone managed (except Myriam who was getting a free-ride with Laura).

Monday we went for more Tarka-the-otter branded tourism with a ride on the scenic Tarka-line railway from Barnstable to Exeter. Exeter cathedral provided some great ressources for the kids and we bought fudge so that made us all feel good too.

Today we left Devon and crossed the Tamar into Cornwall after a scenic drive alongside Dartmoor.
That was a long one but we have lots of catching up to do. One of the reasons we've not been blogging the last few days will no-doubt be the subject of a future post - the dreaded "bedtime"...