By Unknown - October 03, 2017
If the primary objective of our year-long road trip is to give our children a taste of life in the UK, then our two days in and around Ravenglass were a specialist module in English holidays. We arrived having driven down the western edge of the Lake District and made the most of the good weather by heading down to the beach. Ravenglass is actually on an estuary of three rivers and the beach is really the banks of the river Esk, but Samuel was on a total mission to build sandcastles and so that's what we did. 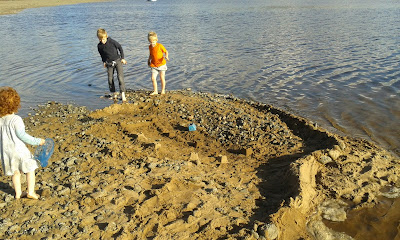 The rising tide provoked a conversation about the challenge posed by rising sea levels and the link to climate change. Their sandcastle was swiftly protected by substantial sea defences that gave it another 10 minutes of existence.  Paddling in the semi-saline waters of the river Esk and the Irish sea while complaining about the inconsistent structural characteristics of the estuary sand somehow captured the essence of an English beach holiday. 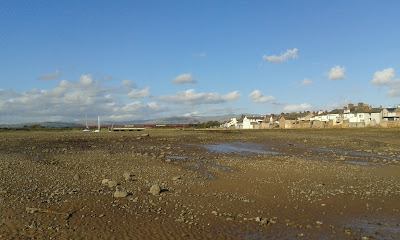 I don't know about your childhood holidays but mine were always carefully planned to be in proximity to steam railways. We already knew there was a narrow gauge steam railway in Ravenglass and while we were on the beach that was supplemented by a steam special chuffing along the coastal main line. It was a picture postcard moment with the foothills of Scafell in the background. My cheap 3-year old Android phone camera doesn't do it justice.

The next day was forecast to be windy and rainy and we had decided to tackle the weather head on. Rather than cowering in Lucia (the van) we put on our waterproof trousers, coats, boots and hats and headed for the hills. The Ravenglass and Eskdale Railway is a narrow-gauge line built in victorian times for transporting quarried stone from the higher valley down to the main line. It is peculiar in that the steam engines are scale models of full size engines, rather than the usual short dumpy affairs. 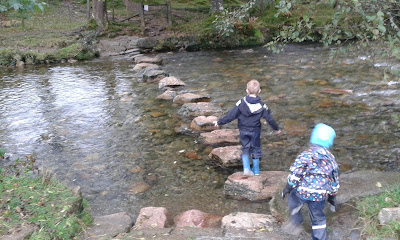 We took the train complete with minature carriages to the end of the line and then proceeded with the classic English "hike in the rain". The trek up to Stanley Gill Force waterfall was both interesting and atmospheric with stepping stones, white-water rapids, and rain-forest-esque steamy humid valleys.  The experience of clambering over treacherous rocky paths to discover a hidden plunge pool and thunderous falls was well received by everyone, with perhaps a few reserves on the treacherous part from Laura.


We walked a total of about 4 miles and Myriam walked about half of that on her own. I carried her for most of the way back in our trusty Ergo-baby carrier which is so compact, light and versatile that the same thing we used when she was 6 months old can be used 3 years later complete with muddy wellies.

As we accelerated our walk back to catch a train, Samuel and I stepped into an especially boggy bit of path which was deeper than we expected and so flooded Samuel's boot with cold runny mud. The last 10 minute of the walk were therefore accompanied by the wails of unhappy children asking the heavens to explain the point of countryside walks - all part of the experience.

We completed our day with a drink in the pub once we'd found a train to take us home. The Ratty Arms was lovely and welcoming even with 3 soggy children and muddy boots. The perfect end to the full-English experience.