By Unknown - April 17, 2018
This blog was going to be a trip-advisor list of our kids' favourite things to do on Mull, but then someone asked a question on a worldschooling facebook group, which coupled with my experience over the last few days, prompted this instead... Sorry for those who are much more interested in the tourism part of our blog!

So, clothes - many of you have asked how much we brought with us, and how are we coping.. 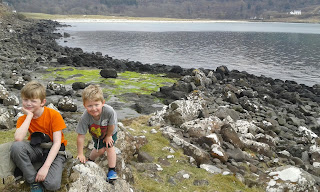 For a whole year in the UK, travelling from snowy Aviemore to sunny Cornwall (amongst other places) we came equipped with a year of clothes for the kids.  We have got many of the boys' clothes second hand from friends, and the same for Myriam from cousins, so we have boxes of clothes at home sorted by age group, and we simply shipped these boxes to the UK. We then sorted them out by season, and have managed to leave some at my parents' house while we travel with the rest. This has meant cutting a pair or trackuit trousers into shorts for Nathanael, as we haven't been back to Guildford since January, and to be honest, he would be in shorts in -10°C if he could.

In the van we carry enough clothes for each of us for 10 days, and we generally do some washing every 5-7 days, depending on where we are. We could stretch this out a bit, but in the end, storing dirty clothes is a pain too. We needed to upsize our laundry bag quite early on, and we moved storage from behind the drivers seat to the shower area.  Our separate shower area is probably the only thing in the van that we have decided is surplus to requirements, but that's another blog post..

A campsite with commercial washer and dryer is pretty high on our priority list. We only travel with one set of sheets and towels, so need to be able to wash and dry them in the day. And sickness bugs are unpredictable, and messy, in a motor home :-(   And several of my children have the rather annoying habit of eating with their fingers, and then wiping their hands on their clothes.. Oh dear, they've definitely not been brought up with French table manners. 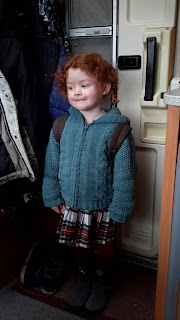 In Tobermory, we needed to go down to the harbour office to use their washer and dryer. This worked fine once (I took the kids to the aquarium, James did some shopping and odd jobs between washing supervision) but the second time was more tricky - there was a queue, and one of the dryers was broken. After a couple of hours hanging out in the carpark, having fed the kids, we decided to give up on the dryer, and bring everything back wet to the campsite.  Each time we wanted to use the washing machines, we needed to go down in the van (there are buses, but not frequently enough for us to be able to use them, they were mostly organised around schools).

When we have wet washing, and no other solution, our awning becomes our drying room - fan heater, good ventilation, and sunshine mean that one load of washing can be dry within 12 hours..

In Belfast, the campsite had domestic washers and dryers, which means smaller loads and longer times. A commercial machine can maybe take 10 kg of washing, at a guess. And the normal wash time is 34 minutes. And dryers take roughly 60 minutes. Domestic ones are roughly double. Or in Belfast's case, even a little bit more - Nathanael and I had to sprint to make it to the cinema on time for Peter Rabbit - there was no display to tell us how long the machine was going to take.

[I didn't realise I had so much to say about washing machines, can you tell they've been driving me a bit nuts recently?!]

And then we put everything in the dryer, which ran out of electricity (token operated, again, no indication as to how long the token would give me) after 90 minutes. The washing was still wet, so I fed in another token. Late at night, I collected that load (of sheets) only to discover they STILL weren't dry. Conclusion, the machine wasn't working properly. Problem, I had a second load of wet washing.. Did I mention that domestic machines are a bad idea on a campsite... And because we were only staying 2 nights, we hadn't put up the awning. So we had to dry everything in the motorhome, the first load overnight, and the second load the next day, while we were out enjoying Belfast. With washing hanging everywhere, you realise how small the space we're living in is.

Hooray for commercial washers and dryers on site, especially here in Ballycastle, where the're a bug with the washer, and so it's only cost £1 instead of £3.50 (Yes, I have told the site owners, I promise).

We have had to buy extra clothes as we've travelled - some essential (walking boots, waterproof trousers for the adults) and some a bit less (ski gloves and trousers), as well as several replacement pairs of gloves as Nathanael keeps losing his. Clothes definitely get more worn by going in the dryer, and so some more sunny weather over the next few months will hopefully mean we can go back to our carbon-emission free outdoor drying.

I'm also suffering from a first world problem of being bored with my 3 pairs of trousers and 10 t-shirts - I expect that I will give most of them to charity at the end of the year, and buy new things. I'm slowly trying to follow James' example and purchase clothes ethically, but find it much harder than him - mostly, if I'm honest, because of the cost of them, but I do like a good eBay bargain..

I have annouced to everyone that there will be no more washing until we get to Grandma Sue's (where I escape with Myriam down to Guildford and leave James with the washing mountain) so let's hope for no more tummy bugs!