I promised another blog post about positive discipline, and as we've been spending the last 10 days relatively 'still' in Wrightington with Grandma Sue, I've got some brain space to be able to do this (ably assisted by a kid-free day yesterday!)  So here's the story of Nathanael's 'bonhomme'

We noticed that Nathanael was really struggling with doing things we asked him to, from getting dressed, to doing the washing-up. With Samuel, you can just remind him that this is our family agreement, and this is usually enough for him to get on with the task in hand. With Nathanael, even if he had agreed on a solution (getting dressed before breakfast, for example), he could just say 'no' to doing it, and nothing would get him to change his mind - no threats, bribes, consequences, re-discussion of solutions...

This drove me crazy, and it was taking up far too much of our time and energy. So I picked up my positive discipline book and re-read the 'mistaken goals' chapter. One of the premises of positive discipline is that 'a misbehaving child is a discouraged child' and our job as parents is to try to decode the beliefs behind our child's behaviour. This will give us the clues on how to work on solutions together with the child. I'm pretty used to seeing the mistaken goals of 'power' and 'revenge' in our family, but Nathanael doesn't strike me as a child with a lack of confidence - he spends most of his time believing he's a super-hero!

However, when I worked through the steps (see Jane's 'breaking the code' tool), looked at my own feelings, and Nathanael's reactions, it was definitely assumed inadequacy that came through loud and clear. James and I chatted, and decided on an action plan. We agreed on things like encouraging Nathanael whenever we could, and breaking tasks down into very small steps (put on your t-shirt, now your socks)

In particular, we talked about trying to help Nathanael realise his own significance, his place in our family, and all the things he is capable of. Along with building up his confidence in his ability to do things by breaking tasks down into smaller steps, I also sat down with him to give him a boost in his confidence by doing a 'self-esteem self portrait'. 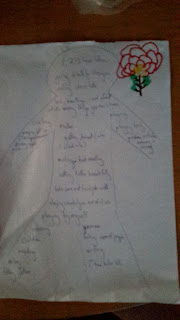 We started with a blank silhouette, and I asked him to write down all the things he was good at, his qualities, and things he liked. He had a couple of ideas, but I realised I hadn't explained it very well, when he came up with 'drinking apple juice' and 'eating chocolate'!! So i gave a couple of my own ideas, and in the end he came up with this amazing person, which he has proudly pinned up beside his bed.
James and I noticed a remarkable difference in Nathanael's willingness to get involved, try new things, carry out his chores, and in his self confidence, within a few days of us making changes.

If you want to have a go at finding out your child's mistaken goal in any recurring difficulty you're having, here's the Positive Discipline chart
discipline positive emotions family parenting positive discipline relationship building