I woke up this morning in a PANIC – when we’re staying at my parents’ shortly, we’ll only have 2 MONTHS left to go... ARRGH, how am I going to cope.

Today is all about transport. 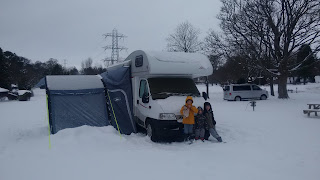 Firstly, there’s Lucia, our trustworthy motorhome. I am very grateful that James is a practical kind of guy – as the motorhome made a strange noise as we were driving here to Essex... “Hmmm – gugrly gurgly that sounds like mumble mumble pipe.  A few minutes later – yes, definitely.. Hang on a second – we’ll just pull over”.. So pull over we did, and he stuck his head under the bonnet, got me to rev the engine a few times, reattached something, and it all sounded a lot better.
Turns out the air inlet pipe into the engine popped off. Something to do with giving an engine extra power (turns out that air makes fuel combust to move some pistons to make your car move – yes seriously I didn’t know that until I just googled it). 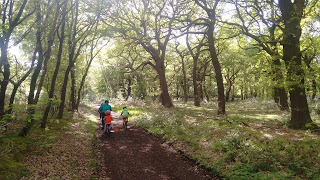 Secondly, we have our bikes. We like using them as much as possible, and in particular when it’s not too hilly!! I have Myriam on a trailer bike, and everyone else travels under their own steam. We started off the year with Myriam in a car seat, and were very grateful when Steve and Jenny in Norfolk lent us a trailer bike – means I’m not just heaving around an extra 20 kilos but we can convert some of her chemical energy into mechanical energy too.  When we’re on a campsite, or going for a walk somewhere, then Myriam sometimes uses her balance bike. So earlier this week we spent the day with Andy exploring Hylands park, and all 3 kids rode their bikes, giving us the chance to catch up on the last almost 15 years of Andy and our families’ respective lives.

Yesterday, we went to visit the Queen Elizabeth Olympic Park, which was amazing, and we went to take a look inside the velodrome.  We noticed a group of young children gathering inside the central area for a balance bike lesson, and Myriam wanted to join them. Although it was fully booked, one child didn’t turn up, and so Myriam took their place.  After a few group balance/co-ordination games, everyone was kitted up and off they went. It was a very relaxed lesson – Rory, the teacher, would come over to each child and adapt to their needs/level. After a few minutes, I asked if Myriam could try a bike with pedals – so Rory watched her balance bike skills, and was happy she could try. He gave her a couple of starting techniques, and off she went (duck to water is the wrong analogy but she was totally confident – the combination of balance bike plus trailer bike over the last few months gave her the skills she needed, and she just stuck the two together effortlessly, no holding of the seat while you run along beside the child needed 😊 ) 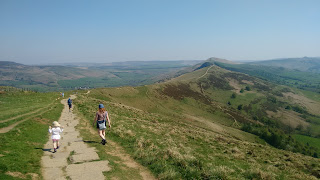 Next on the list is our legs – we walk LOTS.. Today we’ve been to explore a nature reserve, yesterday we walked the length of the Queen Elizabeth park, the day before was a self-guided walk around the City of London finding out about the Roman town of Londinium.  James gave me a Misfit (step counter) for Christmas, and I am highly motivated to get it flashing all the colours of the rainbow as I hit my 11,000 steps for the day. (Yes, I’ve been known to walk around the motorhome brushing my teeth last thing at night, and then run on the spot, just to get the last few hundred in).  We definitely want to find ways of keeping walking in our kids lives when we move back to Gennevilliers. It’s only a 45 min walk to/from school, so I’m hoping to use leg power for the return journey (we used our car last year – which after a 7 hour day at school  does make sense in terms of 3 year old energy levels, but it doesn’t exactly sit comfortably with our caring for creation ethos). 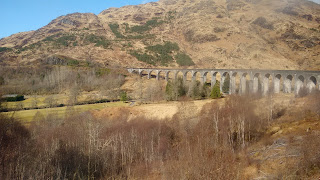 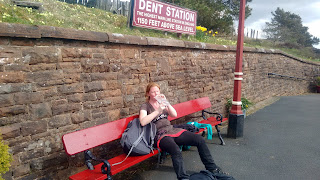 And then there are the various forms of public transport we have used. Bus, tram, underground, rail, each one is an opportunity for us to explore a part of the bit of world we’re living in. Our favourite bus journey has probably been the Double decker from Canterbury to Dover castle – beautiful countryside, great views, and much easier than trying to take the motorhome.  When we’re booking a campsite for a longer stay, access to public transport is key – it means that we can get around and explore.  The only place we didn’t really manage that was while staying on Mull – although there were some buses that went past the campsite, the timetable didn’t make that clear, and there were no bus stop signs anywhere – you had to just know where to stand. 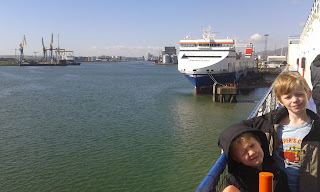 I mustn’t forget that we have also used a few ferries, which we loved, and planes – when Nathanael and I went from Edinburgh to Guildford in early February for a couple of days, it was about a third of the price, and half the time, to fly. As a family, we made a decision several years ago to only fly to places where we had friends or family, so this flight fitted into the criteria.

At the end of the year we’ll be calculating, as best we can, our total carbon emissions, to offset them using Climate Stewards. My friend Ingrid introduced us to them a while ago, (as a side story, that’s how we first found out about A Rocha, a "Christian charity working for the protection and restoration of the natural world" that we are involved with in France. )